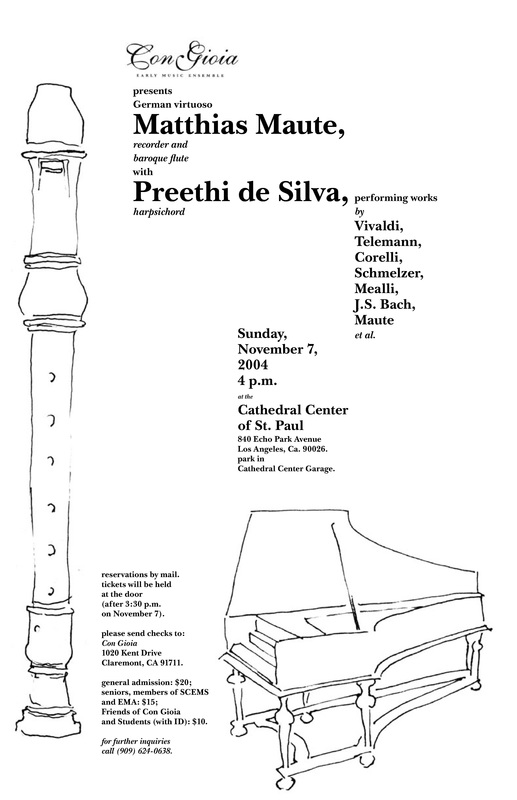 Matthias Maute, recorders and transverse flute
Preethi de Silva, harpsichord
​
Known for his stunning blend of dazzling virtuosity and colorful expressivity, Matthias Maute is recognized as one of the foremost recorder players of his generation. He is a first-prize winner of the Musica Antiqua competition in Bruges, Belgium.  A founding member of Trio Passagio, and artistic director of Ensemble Caprice, Mr. Maute is also a member of the Baroque ensemble REBEL. He has been featured at early music festivals around the world, including those of Utrecht, Bruges, Berlin, Kassel, Schwetzingen, Stuttgart and Avignon.  His recordings can be heard on prestigious labels including Vanguard Classics, Antes Editions and Dorian Recordings.

Monica Huggett, violin
Preethi de Silva, harpsichord and fortepianoBritish baroque violinist Monica Huggett was the featured guest artist in Con Gioia’s concerts on March 10 and 13, 2004.
​
The program included Heinrich Biber’s Sonata V in E minor (1681), Arcangelo Corelli’s Sonata in C major, op. 5 no. 3, and J. S. Bach’s Sonata in B minor (BWV 1014) for violin and harpsichord. They were followed by two works for violin and fortepiano: the rarely performed Sonata in G minor by French composer Joseph Boulogne Chevalier de Saint-Georges, and Sonata in B-flat major, K. 454 by Mozart. Saint-Georges, whose mother was of Caribbean descent, was born in Guadeloupe and educated in France. He earned considerable recognition as a composer in Europe in the late 18th century. Ms. Huggett, who recently performed one of St. Georges violin concertos as soloist and conductor of the Portland Baroque Orchestra, also performed the Chaconne from Bach’s Partita in D minor, BWV 1004 for solo violin.

Special to The Times
The hardy, long-running Los Angeles Bach Festival – 71 seasons strong and counting – doesn’t officially get going until March 28.  But for those who couldn’t wait, there was a notable “pre-festival concert,” sponsored by Claremont’s Con Gioia Early Music Ensemble, in the First Congregational Church’s Shatto Chapel on Saturday night: a recital by one of the leading lights of the Baroque violin, Monica Huggett.

No mere hodgepodge of 17th and 18th century music, Huggett’s program was helpfully sequenced in chronological order, a history lesson not only in style but in choices of instruments.  Huggett’s keyboard partner, Con Gioia founder and music director Preethi de Silva, spent the first half playing a harpsichord lavishly decorated with Japanese figures, switching to a fortepiano in the second.  For her part, Huggett switched from a Baroque bow to a 1770-vintage prototype of a modern bow; the latter’s ability to sustain notes and dig was striking.

Huggett and de Silva opened with the ever-unpredictable Heinrich Ignaz von Biber’s Sonata No.5 – a piece loaded with streaky virtuoso flights and quirky tempo changes. Despite the blurring limitations of her Baroque instrument, Huggett next caught the rhythms and generated some incisive attacks in Corelli’s Sonata in C major, Opus 5, No. 3, and the finale of J.S. Bach’s sonata in B minor, BWV 1014, was especially turbulent and exhilarating.

Even in these musicologically correct times, it still comes as a mild shock to hear the oft-heard Bach Chaconne – with its daunting legacy of high-wattage interpretations by the 20th century’s great violinists – played on the lighter, thinner-toned Baroque violin.  Huggett handled the work very freely, altering some of the note values in the process, with some loss of tension midway through, yet bearing down nicely toward the close.
​
Switching to the 1770 bow for the first time, the violinist, with de Silva, then turned to a pleasing, energetic classical-styled sonata for fortepiano and obbligato violin by Guadeloupe-born contemporary of Mozart, Joseph Boulogne, Chevalier de Saint-Georges – violinist, composer and skilled swordsman. Huggett was also well-attuned to the wit within Mozart’s Sonata in B-flat major, K.454, and de Silva proved to be a particularly expressive performer on the fortepiano.